The Vegetable Garden in August - 2019

August contents:  How to grow your own saffron.....  Planning ahead is the best way to have healthy food all year round..... Sowing salad crops in modules now means the best conditions for germination.....  Growing your own means zero food miles, fresher, cleaner and cheaper too.....  Keeping crops harvested is important.....  Mulching well looks after vitally important worms and also soil fertility......

How to grow your own saffron. Or how to achieve the ultimate in 'grow your own one-upmanship' by growing the most valuable spice in the world!

Although this is a really hectic time for gathering and preserving of summer crops both outside and in polytunnels - thinking ahead is really key at this time of year. Good planning now will really pay off in late autumn and winter. If you don't have protected space like a tunnel or greenhouse - and haven't so far sown any winter crops - then this month is really the very last chance to sow many crops that you will get a decent return from in the open ground over the autumn and winter - perhaps given the extra protection of frames or cloches. There are plenty of suggestions in the sowing list for this month.
I also always try to make sure that all the ground in the vegetable garden is covered either with something that will give a crop in late autumn and over winter, or with a green manure which will improve it's fertility and structure. That may then later be covered with a rainproof dark cover of some kind to kill off the top of the green manure used and let the worms begin to work the decomposing it and pulling the plant material in. Then all I have to do to prepare ground for early crops is just scratch over the surface which by then will be nice and crumbly - the worms having done most of the work! I know it's difficult to think about the winter when we still hope to enjoy some more summer - but if you don't think ahead now - then you'll be sorry later. I always start to sow my winter salads at the end of July - when the last thing one wants to think about is winter! The thing is though - a lot of late autumn and winter crops like chicories, kale, pea shoots etc. all need a long growing season even for growing undercover. Just sowing a couple of weeks later means you'll get far later and smaller crops - or you may possibly not get a worthwhile crop at all. Faster-growing things like Oriental salads and other leafy veg like spinach and watercress can be left until the end of this month or even early September to be sown.
Sowing salad crops in modules now means the best conditions for germination
At this time of year, sowing in modules is particularly valuable for crops that prefer cooler conditions while germinating. Crops like lettuce and spinach will germinate more easily, since you can give them ideal conditions - something you can't always be sure of in the open ground.  Germination of some crops, particularly lettuce, can be inhibited by too high a temperature in the first 48 hours after sowing - so I tend to sow lettuce in particular, in the afternoon or evening, and then keep the modules in the shade of a north facing wall for a few days until they're all well germinated. This is the main reason people can find lettuce difficult at this time of year - and sowing in modules in the cool this way completely avoids that problem. After they're all well germinated - then I move them into better light, still shading from the sun a bit as it can be very strong at this time of year. Sowing into modules also means you can give plants more protection from slugs, which is the other major cause of seedling losses. Plants in modules or pots also tend to grow on a bit faster, which is useful if you're a bit behind with your seed sowing and they're also out of reach of slug damage if they're on a table or other structure raised off the ground!  Starting off your winter salads this way means that as soon as a summer crop is finished - you'll have lovely big plants in modules that you can plant into nice neat rows with no gaps and away you go!
With the price that vegetables may well be in the shops - if they're available at all in the event of a 'No Deal' Brexit at the end of October - and possible lack of availability of many other crops - it really makes sense to grow all that we possibly can ourselves. Salads are a particularly important crops to grow in winter - when there is almost nothing other than baby leaf spinach in the shops - and even then it's at least two days old at best, and already losing vital nutrients. Anyway - I could never bring myself to buy any sort of bagged salad. If I had no option - I would buy organic baby leaf spinach but only for cooking - never for eating raw!
Growing your own means zero food miles, fresher, cleaner and cheaper too.
Farmer's markets are the only other alternative if you want to buy a better selection of organic vegetables. But make sure they're genuinely certified organic by asking what organisation they are certified by - and checking if you have any doubts. (They should display their certification number on their stand. They won't mind you asking in the least if they're genuine organic producers, because checking the validity of produce is good for them as well. They pay a hefty licence fee to be inspected and verified every year - so the last thing they want is anyone trying to cheat - trying to pass off their produce as organic if it's not!)  As salads are so easy to grow yourself though - they are always my first priority for sowing all year round. As soon as one crop is planted from modules - then another is sown in order to keep up the continuity - gradually changing over to sowing tunnel crops at the end of this month and throughout September.  I'd far rather have too much than not enough - the hens are always grateful for any surplus and all the greens make for eggs with fabulous, orange-coloured yolks! 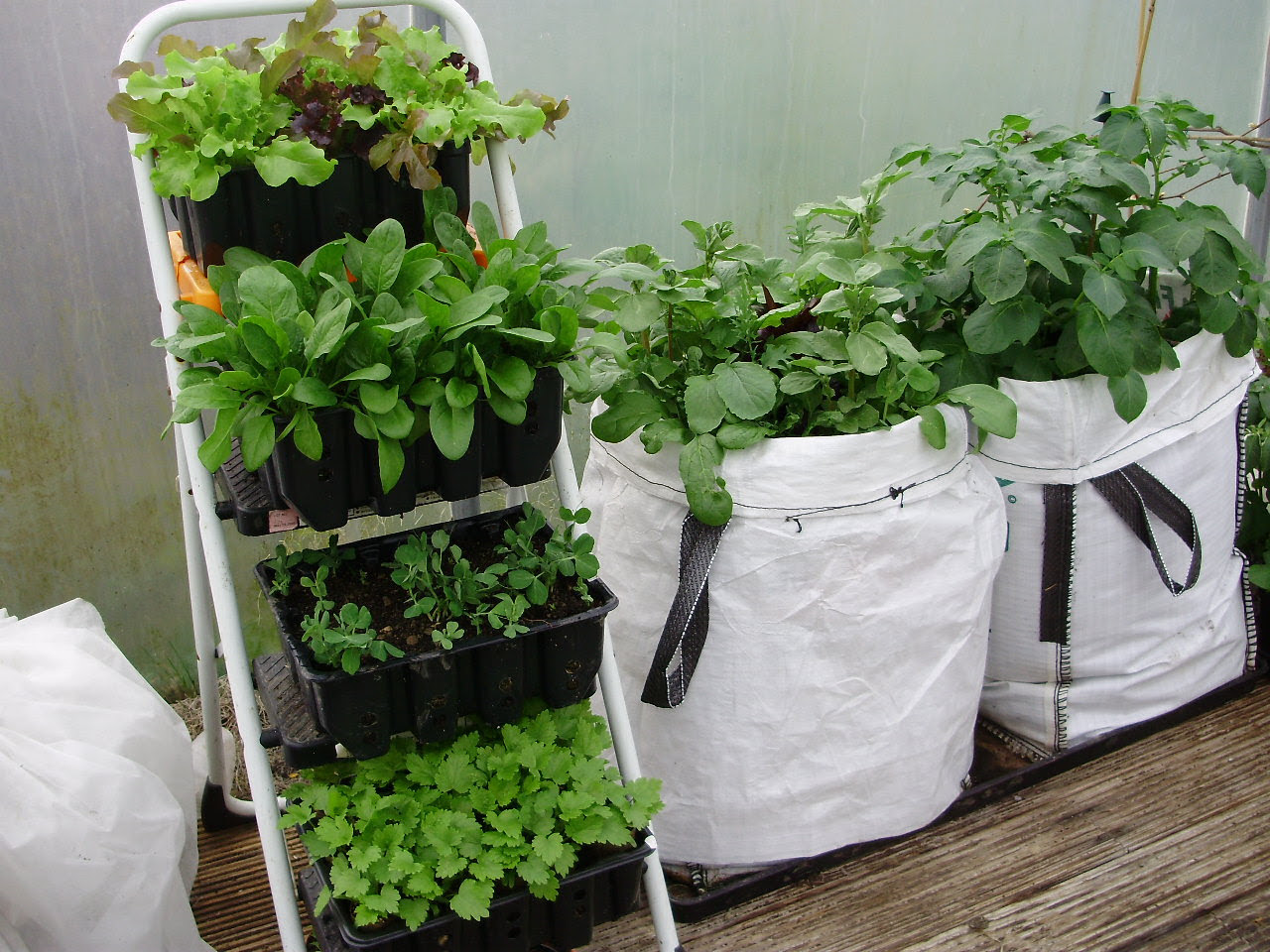 August is also the month when many people are away for a week or two, especially if you're tied to school holiday times. The weather is so unpredictable that it's hard to know how much things will need watering - but if you water thoroughly and then give everything a really good mulch, with grass clippings (which I use a lot as you will know) or with compost, before you go away - this will help to stop water evaporating and also keep weeds down at the same time. Any weeds that do come up while you're away will be very easily pulled up later from the moist, friable soil under the mulch. Most things should be safe enough for a week or so. You may be frying if you're in the Med. - but I doubt we will be here! If French or runner bean plants dry out at all the flowers tend to drop off before setting - they need consistent moisture at the roots if they are not to drop their flowers before they set pods.  Mulch them well with grass clippings - keeping them about 6ins/10cm away from the bases of the stems to prevent possible rotting. The value of mulching can't be underestimated - bare soil heats up much faster and loses both water and nutrients very quickly. Mulching also encourages good worm activity, as worms prefer cooler soil. Perhaps you could persuade a friend or fellow allotmenteer to water if the weather's extremely dry and hot - as long as you tell them to pick whatever crops need picking and keep them for themselves - that's normally a pretty good incentive! Always make sure that you water well before you mulch and then the mulch will stop the water evaporating and seal it in.
If crops aren't picked - as soon as the plants have set seed, a hormone signal is sent to the main part of the plant to say 'job done, seed set, so no need to produce any more'. This is one of the reasons for picking things when they're young and tender rather than when they're older and would give a heavier crop. It's so easy and tempting to overdo that! They tend to taste far better when young anyway. If they're not picked, you will have to pick a lot of old pods bulging with set seed when you come home - they will be inedible unless you want to shell them for winter bean stews but the actual pods will only be fit for the compost heap at that stage, and it will take at least a couple of weeks for the plant to get back to producing more flowers. That means that you may not get many more beans before the colder autumn weather and reducing light stops growth. Keep picking and they'll keep coming!
Much better to give away all of your crops for a week or so, while you're away - and keep your plants continually producing, so you can come back to some lovely home grown food. And it's always a useful way to cultivate some goodwill and store up some 'Brownie points' at the same time!!