The Fruit Garden and Orchard in December - 2020

December contents: The Joy of Seasonal Treasures.... Whole fruit IS good for you! And if fruit is organic - there's no chance you'll be eating toxic chemicals!....  What Fresh Fruit is Available to Pick Now?.... Urgent work that needs doing now... Finish Winter Pruning - a very quick guide.... Grow your own lemons!....  And The best Christmas Present for a Fruit Gardener is?..... Cape gooseberry compared with 1 euro coin
Cape gooseberries are very high in the phytonutrient Beta-Cryptoxanthin - which is a pro vit. A carotenoid and a very potent anti-cancer and anti-aging antioxidant,  which also effective against arthritis, age-related macular degeneration or ARMD (protecting eyesight), hepatitis, asthma and rheumatism. It has no known side-effects in medicine. Although I do know of a slight one - if you're greedy and eat more than a dozen or so fruit a day - they are far more effective at motivating the gut even than syrup of figs!! - Be warned as they're quite addictive! They're also used in Chinese medicine for treating abscesses, coughs, fevers and sore throats.
They are absolutely divine on a Pavlova - particularly with a couple of passion fruit squeezed over them - it makes my mouth water just to think of it!  And as they are very high in pectin - they also make jam easily - but I think that's a crying shame unless you've got acres of them. They're so much nicer fresh, and at this time of year any fresh fruit is so welcome. Supermarket prices for any fresh 'exotic' fruit are horrendous at this time of year - and these are actually far easier to grow than tomatoes! They are also delicious dipped in melted dark chocolate - but then - aren't most things!?

Prune grapevines, indoors and outside NOW or as soon as possible. This is urgent as doing them now gives them a chance to heal their wounds properly. Yesterday I actually thought I saw some grape buds that were slightly swelling - or maybe that was my imagination! Whatever - if we have a mild spell after Christmas or in early January they can start into growth early - and with the sap rising fast could bleed to death, or be severely weakened. Grapes in containers are the first priority - they always seem to start growing just that little bit earlier than those planted in the ground. Although the upside of that is that you could give them their winter rest against a north facing wall - one of the many tricks that kitchen gardeners of centuries ago used to either bring forward, or hold back plants.
I've never found most grapes to be really successful outside here in this part of Ireland - we're much too cold and wet. In parts of the UK where it's drier, there could be some newer varieties of seedless grapes now that might be worth trying - but whether they are seedless or seeded varieties - you need to get an early fruiting variety and grow them on a warm, south-facing wall. I've seen Muscat of Alexandria for sale everywhere here in Ireland - and it's not at all suitable for outside here because it ripens far too late, even if you have an extremely warm spot outside for it. The same goes for Flame - a red seedless grape. They will ripen properly, but still pretty late, in a polytunnel or greenhouse. Outside grapes are always smaller-fruited too unless you thin them. The main problem outside would be any damp weather at the flowering stage hindering pollination - and also when fruiting as damp weather can cause rotting of bunches. Also of course there's the perennial problem of birds and wasps! I grow quite a few varieties in large pots and move them out of the tunnel in the winter as they're actually very hardy - but at flowering time up until fruiting time I bring them back inside - unless I want to delay ripening a particular variety, as I've mentioned before. 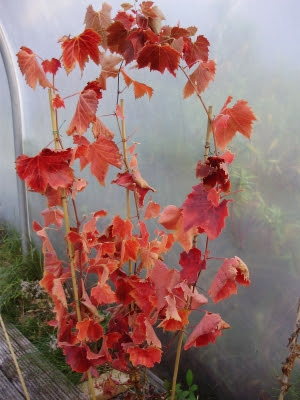 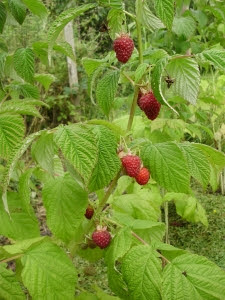 Grow your own lemons! 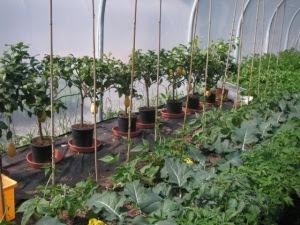 Lemons beside young plants of climbing French beans and calabrese in spring
If you're looking for something extremely decorative, incredibly perfumed, delicious and great for impressing your gardening friends, there's nothing better!  Imagine home grown lemon sorbet at Christmas - or a home grown slice of lemon in your guests' G&T!  I've always been fascinated by them, and because it was impossible to get organic lemons anywhere 30 years ago, I've been growing them ever since - even though organically grown lemons are available most of the year now. They're much the best of the citrus family for beginners, and do produce a worthwhile crop most years.(They're actually worth growing just for the wonderfully scented flowers alone!) They just need a little understanding and TLC, then they're not difficult if you can bring them inside in the winter, away from hard frost. They're fine outside all summer, sheltered from the wind. They are actually acid loving plants, which means you treat them like Rhododendrons and water with rainwater. ONLY water them when they dry out - nothing will kill them quicker than their roots sitting in water!  You can get a citrus feed (chemical) or I top dress in spring with 'Osmo' organic all purpose granules and feed with Osmo liquid feed, or nettle liquid feed later, as they like a high nitrogen feed, but they hate potash, so don't use tomato feed as I saw one article recommending. Mind you - that 'expert' even got his phosphates and potash mixed up!!
The main pest of all citrus trees is scale insect, which seems to just appear from nowhere sometimes, but it's easily dealt with using an organic insecticidal fatty acid soap spray. Don't use it when the young very tender shoots are developing in spring - or you'll burn them. And never spray in strong sunshine - it has the same effect. I've had some success with Navel oranges, but not much with grapefruit, which really need more warmth. The easiest lemon varieties are Four Seasons, Ponderosa and Meyer's (an easy to grow, delicious, sherbetty-tasting, old hybrid). Aldi have really good lemon trees in the spring every year, around 20 euros, about half the price of most garden centres. They're quite hardy, but a very hard frost will kill some of the small overwintering fruit and some of the young growth even if they are in the tunnel, although a cover of fleece will usually prevent this. It won't kill the trees though if you keep the compost pretty dry in the very coldest weather - and only start to water again when you see a little new growth starting in spring - often from the trunk. Limequats - a cross between a lime and a kumquat are hardy, easy and delicious too.  I was in Johnstown Garden Centre near Naas in Co. Kildare recently - and they have a good variety of really nice citrus plants for sale - they would make a super luxury Christmas present for a keen gardener.
I've never been able to resist trying to sow anything from seed, particularly if it's free!  A fun thing to try with any pips from your Christmas clementines and satsumas is to sow them individually in small yogurt pots, in a free draining seed compost. Choose the very fattest pips. They must be sown in separate pots because there is a fairly good chance that a few of the fattest pips may produce more than one seedling! These 'twins' or 'triplets' are then known as 'poly-embryonic' seedlings, meaning that only one will be a true seedling - and any additional plantlets resulting from the pip will be exactly the same as if you had taken a cutting from the parent plant!  When these are an inch or so high, in spring, separate them very gently (they carefully pull apart quite easily if in a sandy, well drained compost like the Klassman organic seed compost) and grow them on in an acid well drained compost.
These 'poly-embryonic' seedlings will eventually grow on and fruit, perhaps in as little as three or four years. You won't know which are the 'true' (like a cutting) or 'mongrel' seedlings until that happens, but the mongrels are often the most vigorous. It's easy, fascinating and fun if you have the time and patience!  In the meantime, they make handsome small evergreen trees for a greenhouse or conservatory. I've had great success with them over the years. I also grew dozens of Kiwi fruit from seed over 25 years ago - very easy, and some of them have now taken over my 'jungle' area in the garden, with their beautiful huge jungly-looking red and green plush leaves just like velvet. Most exotic looking!  They are extremely vigorous though - so need a lot of space! Avocados are worth trying too - they make great indoor foliage plants. Try some of these and you might have some home grown Christmas presents to give away next year - so much nicer than bought ones!

And The best Christmas Present for a Fruit Gardener is?...... Semi-dehydrated peaches Without doubt, a really terrific Christmas present for any keen fruit grower is a dehydrator.  I bless the day when I bought mine - I absolutely love it and I use it for so many things!!  You can see some of the delicious results above in the Cape Gooseberry picture - and here are some semi-dehydrated frozen peach pieces which I took a photo of earlier this week. They have the most intensely delicious, peachy flavour that you could possibly imagine, just like chewy peach sweeties. I prefer them only semi-dehydrated to just a pleasantly chewy leather-hardness, when they retain far more of their flavour and also nutrients. Again they are absolutely delicious on salads - but also utterly irresistible whenever I go to the freezer for something - so they don't tend to last too long!! I semi-dry Lakemont Seedless grapes in it too - to make the most heavenly sultanas. I don't like anything dried until it's crisp unless I'm actually making veg crisps - another naughty but very delicious use for the dehydrator! Dehydrating is a great way to use any damaged fruit which might go off before you could use them - so they prevent food waste too. Actually - a good dehydrator is a blessing and it's something that people rarely buy for themselves. That is - unless they're a very greedy fruit geek like me!!

I Hope You Have a Very Happy Fruity Christmas Everyone & A very Healthy and Fruit-full New Year! :))

Thank you so much to all the people who have taken the time to write and thank me for my work - or thanked me on Twitter. I really enjoy sharing my original ideas and 40 years experience of growing and cooking my own organic food with you. It's most satisfying and naturally also very complimentary if others find "inspiration" in my work. - But if you do happen to copy it, or repeat it in any way online - I would appreciate it very much if you would please mention that it originally came from me. Thank you.