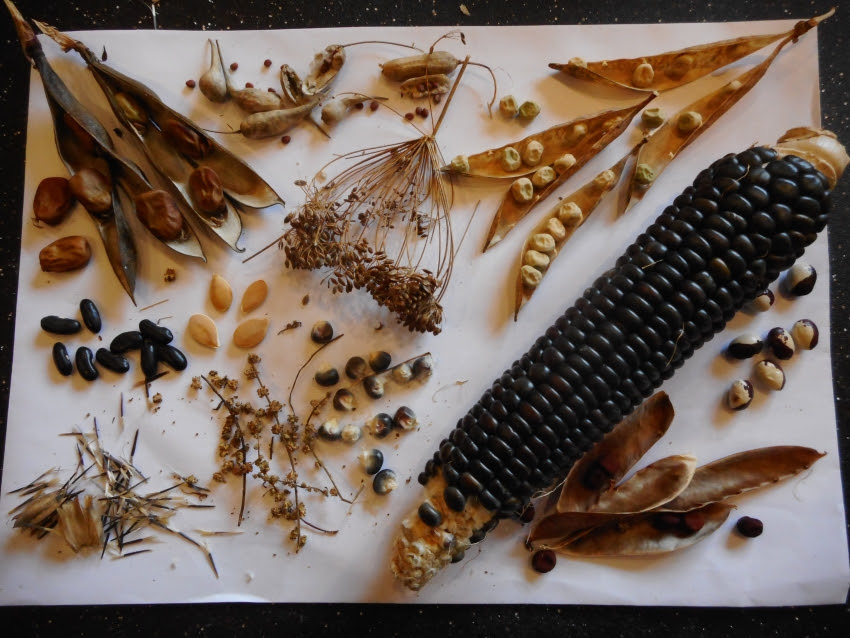 "Remember - always sow the seeds. You can catch up on everything else - but if you get behind on that, then there's nothing whatsoever you can do about it."  (A great piece of gardening advice I was given many years ago)
Also remember - this is just a checklist to remind you of what you could possibly sow now if you want to. NOT what you have to! So please don't complain that it all looks far too much to do - as one person did! I still find this list a helpful reminder - even though I've been growing my own food for over 40 years, it's easy to forget something at such a busy time!
Another good piece of old advice is that if you can see weed seeds germinating - then it means the soil is warm enough to sow some of the hardier things, and it will definitely be warm enough for planting hardy veg plants. I find sowing in modules or pots of peat-free organic seed compost best for almost everything now though. It gains me at least 2-3 weeks of extra growing time at either end of the year. It also means I can plant out much bigger plants that are far more slug-resistant and will withstand the odd night-time nibble without total destruction!

Here's what you can sow now outside if conditions are suitable - or inside for planting outside later:

In modules under cover without heat, or in a cold frame - (covering with fleece on frosty nights) - or under cloches, or if the soil's warm enough in the garden:
Asparagus, globe artichokes, beetroot, broad beans, carrots, Claytonia, maincrop peas, sugar snap, mangetout and early peas, parsnips, summer and autumn cabbages, savoy cabbages, Brussels sprouts, cauliflowers, calabrese and summer sprouting broccoli, Hamburg parsley, onions (sow seed early in April (don't plant sets in the ground - as you could bring in disease. Plant in containers instead for an earlier crop if you need it), leeks, spring onions (scallions), lettuces (keep both lettuces & spinach cool for first 24 hours after sowing - as too high a temperature can cause poor germination or trigger dormancy), kohl rabi, Ragged Jack, Cavolo Nero and other kales for baby leaves, radishes, Swiss chard, summer spinach, seakale, white turnips, landcress, watercress, lamb's lettuce, salad mixes, 'soft' herbs like borage, basil, parsley, dill, fennel, Greek oregano and coriander. Remember - parsley likes to be warm and can take about 3 weeks to germinate anytime - always just when you think it's not going to! Basil also needs warmth.
As the light is increasing now - this month many hardy crops can still be hurried up a bit by sowing in the warm which will enable you to catch up if you're a bit behind because of the weather - but remember to reduce the temperature after germination and harden them off gradually so that they don't get a shock or a check, which could possibly initiate bolting or running up to flower (this particularly applies to cauliflowers and calabrese/broccoli). Rhubarb can also be sown from seed now - Unwins early red and Glaskin's perpetual (low oxalic acid variety) are both good varieties from seed. Asparagus peas, cardoons and New Zealand spinach can be sown outside from mid-April in warmer areas.
It's also worth sowing some single, early flowering annuals in the open ground or in modules - such as limnanthes (poached egg plant), calendula, cerinthe, convulvulus tricolor, phacelia or even red clover and buckwheat normally used as green manures (bees love them) etc. All of these will attract and provide food for vital beneficial insects including bees and hoverflies, which help with pest control, and also butterflies, moths and other insects into the garden and polytunnel for pollination. The will also provide nectar for any overwintered butterflies. Any insects will then in turn also attract and feed wildlife like birds, frogs and bats.

What you can sow now for growing on in the polytunnel or greenhouse:

In a heated propagator, for cropping later in the tunnel (or some for planting outside later) - Alpine strawberries (Reugen - best var.), globe artichokes, asparagus, celery, celeriac (early in month or won't grow to decent size), Florence fennel, dwarf and climbing French beans for cropping in polytunnel beds ('Cobra F1' is a very heavy-cropping, thoroughly reliable climbing variety - it's a round-podded, stringless, improved form of the old 'Blue Lake' - available in the B&Q range at half the price of all other seed companies! Purple Cascade is another delicious var.), tomatoes, chillies and other peppers (soon as poss for a decent crop), physalis (Cape gooseberries), early courgettes, melons, cucumbers and early sweetcorn for tunnel cropping. Don't forget melons and cucumbers need to be grown on in consistently warmer conditions than tomatoes to be successful.
Don't sow courgettes, marrows, pumpkins, squashes or other very fast developing vegetables such as sweet corn, French or runner beans which are destined for planting outside until at least mid to late April, so that they can then grow on without any checks, as they are fast growers. Also in gentle warmth you can now sow basil (water very carefully after germination, always from bottom by sitting in tray rather than drenching from top! Over watering, particularly in cold conditions, will kill basil faster than anything! - (I get more questions about growing basil than almost anything else!). You could also buy pots of basil for splitting up and planting into pots now for a super-early crop - but these will still need warmth for a couple of weeks..
Also sow some single-flowered more tender annuals such as Cosmos, Tagetes, French marigolds (T&M 'Tall Citrus Mixed' is good), also nasturtiums etc.- these attract many bees and beneficial insects which will help with pest control and pollination both in the tunnel and outside.
It's vitally important that flowers are single-flowered, as bees, hoverflies and other insects can't access the nectaries of double flowers. This means they are completely useless to them, in which case they won't hang around for long. It also means they can waste precious energy trying to get at the nectar in the flowers!
In modules in the tunnel without heat, or direct in soil now, you can sow - Beetroot, broad beans and peas for planting outside, summer cabbages, calabrese, cauliflowers, carrots, white turnips and radishes (in the soil for an early tunnel crop), onions, chives, Welsh onions, scallions, leeks. Quick growing salad mixes (early in the month) to give some young leaves fast, leaf radishes, also summer spinach, kales, rocket, spinach and coloured Swiss chards etc. for baby leaves. Fennel and other 'soft herbs' like borage, chives, parsley, dill, Greek oregano, salad burnet and coriander. Single-flowered, insect-attracting hardy annuals like limnanthes, convulvulus tricolour and calendula can also be sown direct into the soil in beds now.

If you still haven't yet planted any potatoes outside don't panic!

You can speed them up a bit and catch up by planting into pots now inside, which will bring them on very quickly.  You can then harden them off gradually and plant outside into their cropping positions later - protecting any exposed young shoots with fleece if necessary. These will still be way ahead of any planted on the traditional day here in Ireland - which is St. Patrick's day - outside into cold, wet ground, where they'll sit sulking and vulnerable to pests or rotting - particularly after a long spell of cold, wet weather! (This year due to my dodgy ankle - I still haven't planted half of mine yet either - although I have just planted some out into a polytunnel bed which I planted in pots in February).
I grow all my potatoes this way now, as it ensure that I always have a fairly good crop underneath them by the time potato blight hits - which can be very early in some seasons here, any time from early June onwards depending on weather. (Doing this means I never have to spray with any organic sprays like copper sulphate which can build up on clay soils, and I wouldn't use.).
And the same goes for garlic!
You've also JUST got time plant some spring planting varieties of garlic early in the month if you get a move on!  Check the pack to make sure they are varieties suitable for spring planting! Garlic needs cold weather to develop it's roots, or it may produce a large bulb rather than cloves. I find that planting in modules or pots and keeping in a cold spot, such as outside in the shade against a north wall, until they're well-rooted, is a good way to start late plantings off - then I plant them out as normal. Cristo is the best variety which I've found for spring planting and it has a good strong flavour. Morado is another..
(P.S. I really enjoy sharing my original ideas and 40 years experience of growing and cooking my own organic food with you. It's most satisfying and naturally also very complimentary if others find "inspiration" in my work......But if you do happen to copy any of my material, or repeat it in any way online - I would appreciate it very much if you would please mention that it originally came from me. It's the result of many years of hard work and often hard won-experience. Thank you.)