June/July contents:  Hurrah - Tomatoes are almost ripe!  Now we shall have 'Tomato Heaven' for the rest of the summer!...  Dealing with aphids....  Heat Damage on Tomatoes....  Tomato feeding.... To side-shoot or not to side-shoot - that is the question?....  Carry on mulching....  Keep encouraging tunnel wildlife to help you with pest control.....  A More Unusual Polytunnel Crop..... What do Scientists really Know about Life, the Universe and Everything?....   We're never truly alone in a garden.... 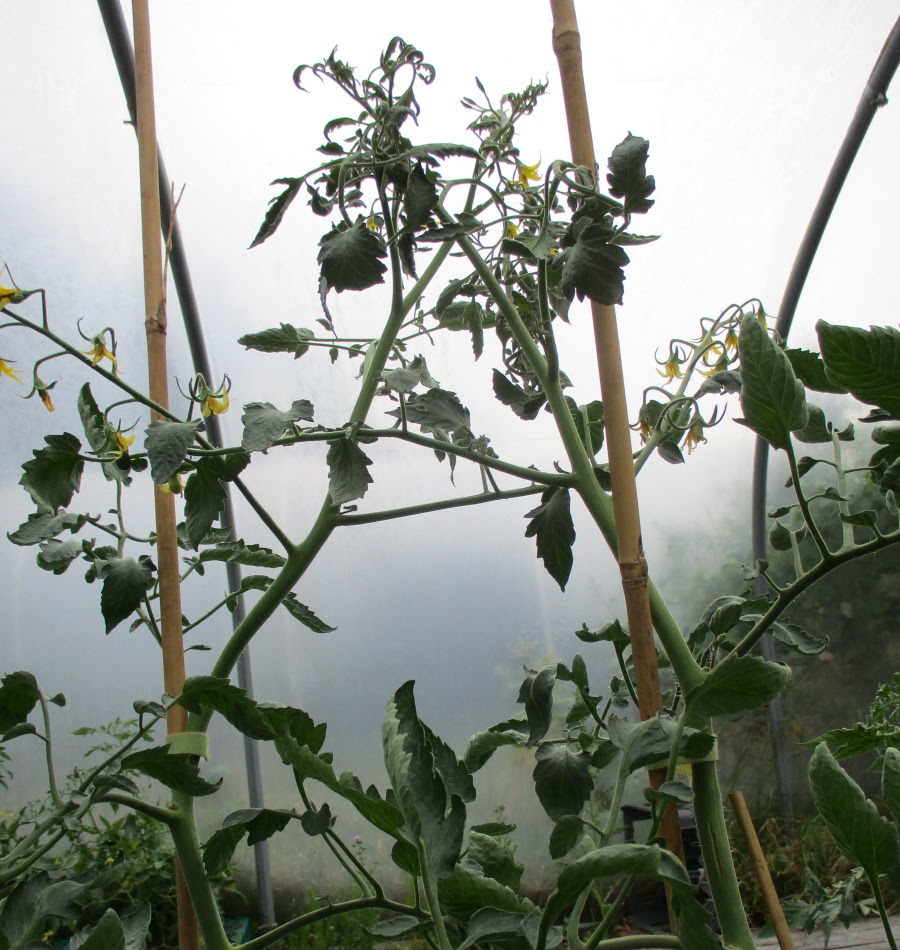 These Rosada plants leaning towards each other trying to avoid the intense heat last summer reminded me horribly of some of the tragic pictures taken during the Australian bush fires last year - which sadly may become more frequent with rapidly increasing climate change
Hurrah - Tomatoes are almost ripe! Now we shall have 'Tomato Heaven' - for the rest of the summer!! 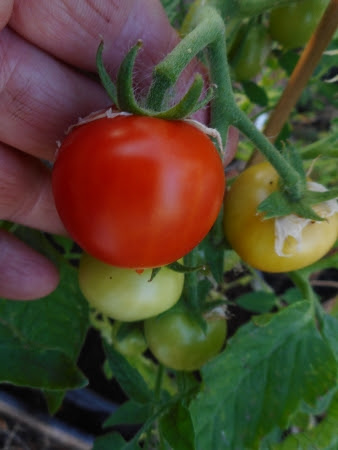 Ripe Maskotka in early June
Maskotka is a reliable tomato that I would never want to be without, and it has been for many years the earliest tomato I've ever grown - always ripe during the first week of June if sown in early March - and I've tried lots!  This year it's a bit later due to the freezing weather in May - but won't be long as it's already turning colour now! Maskotka is quite a large bush variety, which tends to spread out a bit over the summer, taking up a lot of ground space. Tumbler however is much smaller and more compact, and much more suitable for growing in hanging baskets and on my stepladder garden.  Maskotka has competition though!  Last year, the smaller bush variety Tumbler was a great success on the steps of my stepladder garden. The first tomato was ripe on 26th May!  I didn't sow Maskotka until a bit later though, so a comparison was a little unfair! Next year I shall sow them both at the same time and compare the two for flavour and earliness. That's one of the things I love about gardening - the ability to always experiment and compare food crops or other plants, to discover which are the best varieties for growing in your particular location.
I also grow many other plants of the Solanacae family (tomatoes, aubergines etc.) so I haven't got enough room to grow them all in the ground if I want to stick to a proper rotation plan, thereby cutting down on the risk of disease or nutrient deficiency problems. That's why I'm growing 'Maskotka' and some of my other favorite tomato varieties in large pots again this year, which I've found very successful in the past. As this year sadly there won't be a Totally Terrific Tomato Festival at the National Botanic Gardens in Glasnevin, Dublin, again due to the current pandemic, I'm mostly growing the tried and tested, best-tasting, reliable varieties which I've grown for many years, but I always row one or two new ones - just in the hope that I might find an amazing variety which might be better than some I already grow. I never seem to have any problems at all with the fruit setting on them, even when starting them off them very early, as tomatoes are generally self-fertile anyway, and again because I also grow mini-gardens at the ends of the tunnels either side of the doors, full of flowers and herbs that bring in the bees and other beneficial insects, if they need pollination the insects are all more than happy to provide their services!. Dealing with aphids in polytunnels
The first thing many people do when they see aphids is panic and reach for a spray of something - even some of those who consider themselves organic! Doing that is often the worst thing you can possibly do! The first thing to understand about aphids is that feeding with artificial fertilisers or overfeeding even with nitrogenous organic manures encourages exactly the sort of soft growth that all aphids enjoy. It also reduces the plant's own ability to make it's own defences by depressing soil bacteria and fungi. Overfeeding - even with organic manure - can have a similar effect to artificial nitrogen. You may get very impressive-looking plants by lashing on tons of manure or compost the way that some 'experts' advise - but you won't have healthy plants. They'll make soft and sappy growth that is far more attractive to pests and also to diseases. I so often see these 'experts' being asked later on in the summer how to deal with aphids!
I rarely ever actually see any aphids here at all - and if I do it's a sure sign that something is out of kilter in the plant's growing environment.  Problems can often be due to wild swings of erratic, often freezing weather and intense heat that we've already had again this year.  It's something we'll just have to learn to deal with better with the erratic weather conditions which are caused by climate change.  In the last month, my polytunnel has fluctuated between -3 deg Ce to over 40 deg C, and if I was putting up another polytunnel now - I would definitely install side ventilation, so that it could be cooled more with more ventilation. Without that - all one can do is have doors at both ends open all the time, mulch to conserve moisture and protect plant roots from heat, and also damp down paths several times a day so that the evaporating moisture keeps the air moving and cools it a bit. 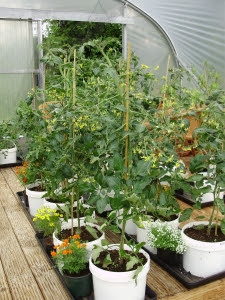 Aphids on any plant are a sure sign that the plant is stressed in some way - often with a reduced immune response due to being overfed with high nitrogen fertilisers or perhaps manure. Some people are having problems with aphids at the moment as many plants have been stressed by the extremes of weather we've had again this spring.  An attack by pests is almost always a sure sign of that or some other stress such as the wrong conditions perhaps on a house windowsill, maybe too hot or too crowded.  So keep an eye on your plants. Look at them closely every day, particularly any young plants still in propagators. The very hot days occasionally over the last week will have encouraged greenfly and other pests to multiply rapidly, which could be a problem unless there are plenty of predators around. Because I grow so many flowers in my polytunnels to attract beneficial insects - which in turn attract all sorts of insect-feeding birds and other wildlife - I have a permanent army of pest-controllers such as sparrows, robins, wrens and frogs, who hunt in the tunnels all year round. It's fascinating to watch them assiduously searching in every crevice of the plants looking for insects to feed their hungry babies. And there's certainly plenty of those judging from the loud demanding shrieks from every corner of the garden! 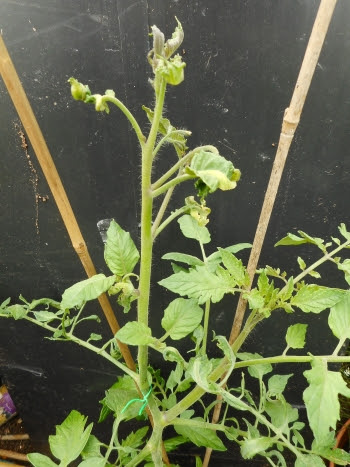 Heat-damaged main tomato shoot on left with healthy undamaged side-shoot on right to be trained up as replacment main shoot
If you do have permanent heat damage to the tops of some tomato plants - this will become evident very quickly - within a few days or a week at this time of year. The leading shoot on the main stem can be so burnt, deformed and dwarfed that it will never recovers - although the rest of the plant may still be completely healthy. Often a side-shoot below the top will be unaffected by it and can quickly be trained up as an alternative leader - so although you may lose one truss of tomatoes close to the heat damage on the main stem - the rest will grow on fine later on and you won't lose too much cropping time. This is why if I suspect there may be any heat damage because of excessively high temperatures, I always leave one or two side shoots near the top and don't pinch them out until I can choose the strongest which can take over as the new 'leading' shoot.  On the plant in the picture here you can clearly see that the original main shoot has become twisted and deformed - and I have left the next healthy-looking side shoot to train up. Some varieties seem to be more sensitive than other - not all seem to suffer as badly every year. This is a delicious small olive green plum/cherry tomato called Green Envy - which seems to be particularly prone to heat damage but is one of my son's favourites. So that's why I grow it - I have top keep the mower happy!
Don't over water tomato plants either - that doesn't help with heat damage - it just rots the roots! Keep the soil just nicely damp - always watering the surrounding area - never directly onto the base of plants - and mulch with grass clippings or comfrey if you can, to keep the roots cool. As I'm always saying - a little extra TLC, observation and attention to detail and you will be richly rewarded by your very grateful plants! 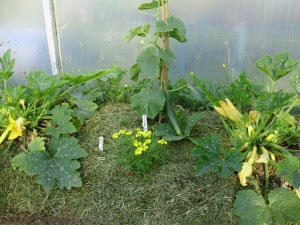 Cucumber 'Burpless Tasty Green' with courgette 'Atena' in side bed late May
It's been such a difficult year for young tomato plants. Wild swings in tunnel temperature from 100degF/40degC during the day to freezing nights. On many recent nights here it was only 2 deg C - at least 6 degrees below the basic minimum required for tomato growth.  Only just a couple of weeks ago it was -3 deg C in the tunnels! Even under three layers of fleece the tomatoes were quite literally blue with cold!  Since then they've been heat stressed too! I'm amazed they've recovered so well, but they're growing on again now and the weather forecast for the end of this week is for warmer nights. Let's hope so! 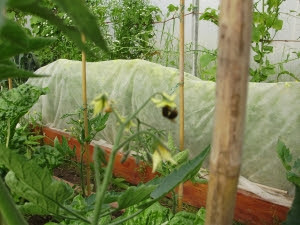 Bumble bee pollinating beefsteak tomato, with carrots under fleece behind
My tomatoes are always smothered in small bumble bees as soon as they're flowering - so I think that attracting pollinators is also one of the secrets, and also mulching well to keep the roots just evenly moist and to avoid wild swings in the root temperature which might otherwise stress the plants. It helps to grow flowers close to the tunnel doors on the outside of the tunnels too - a bit like a floral 'runway' or welcome sign to encourage bees to land inside the tunnels! All the tomato varieties are setting nicely now, and I can't wait to show you some of the new ones - they look really exciting - especially the new black varieties which are high in healthy anthocyanin phytochemicals. 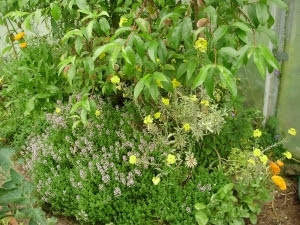 Mini-gardens under peach trees with herbs & flowers attract beneficial insects & bees
You've still got time to sow lots of flowers in your tunnel. You could also leave some of last winter's herbs like coriander and parsley to flower and go to seed, or you could buy some flowers in modules from garden centres as a last resort. If you even have radishes bolting you can leave those too - they have pretty scented flowers that insects love! Insects also love the flowers of coriander and parsley. They definitely help to bring in insects for pollination and pest control, some can brighten up your salads and they look beautiful too. I always leave one or two chicory or endive plants too if I have room on the ends of rows - the flowers are so beautiful and the bees adore them! I've got enough seed to last me ten lifetimes now! I also keep a shallow saucer or tray full of water in the mini gardens somewhere - for the frogs which like to live in the shady damp areas of the tunnel and who are very efficient at eating those nasty damaging little grey slugs!
A More Unusual Polytunnel Crop 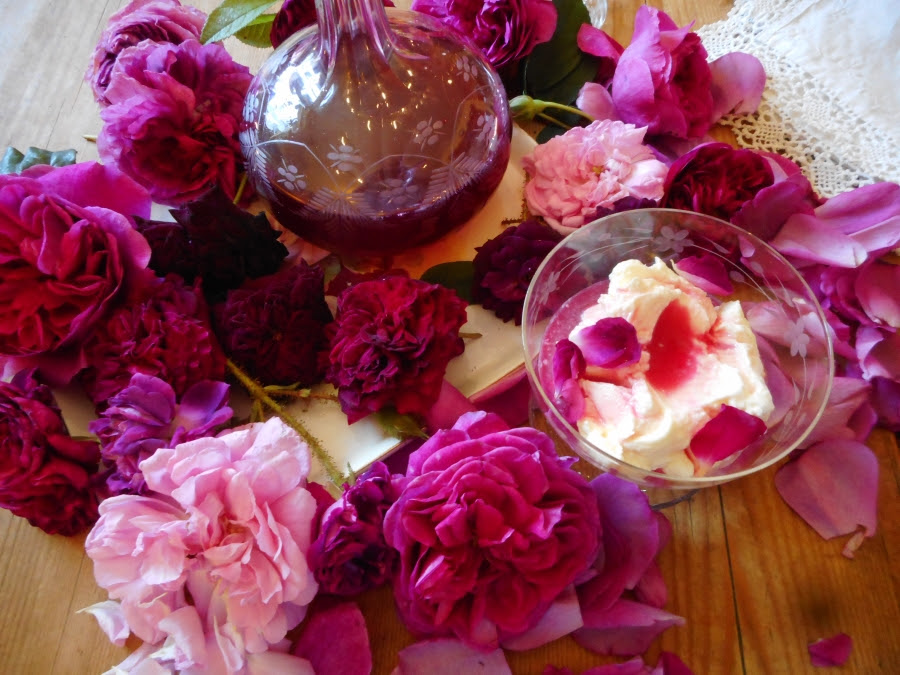